For the longest time, I was convinced that the father in the movie “Sixteen Candles” was one of the best portrayals of a dad in a movie.

I had seen the film countless times since it ranks in two Pantheons of movies: classic 1980′s flicks and the John Hughes’ collection. Plus, it seems that it’s on TV most every weekend. And, yet, it wasn’t until recently that I changed my mind on Jim Baker.

Like so many others – Time Magazine, for instance, named him a Top-10 Movie Dad – I had been swayed by three minutes in the 93-minute movie that Molly Ringwald’s dad was one of a kind.

If you’ve seen the movie (and, really, who hasn’t seen the movie?) then you know what part I’m talking about. Samantha can’t sleep and her dad comes and chats with her to try and cheer her up. It shows a sympathetic side to dads, which wasn’t particularly shown in a lot of movies to that point – and especially in Hughes’ films. Think of the dads from Home Alone, Uncle Buck and Ferris Bueller’s Day Off. They are all inept.

And so is Jim Baker.

The point of his talk to Samantha is that he apologizes that he and everyone else forgot her 16th birthday. Then they speak a little bit about Jake Ryan, and he tells his daughter “That’s why they call them crushes. If they were easy, they’d call them something else.” Then he cracks a joke about having Samantha lie to him about the talk being helpful.

That is almost a heart-melting moment typical of Hughes’ films. However, there are so many things wrong with Jim Baker in the other 90 minutes of the movie that a three-minute talk cannot make up for it.

First off, he forgets his daughter’s birthday. Holy crap, how does that happen? Even back then when there weren’t Outlook calendars and Siri and Samsung watches to remind you of these things, there were still calendars to write on and … yeah, your brain to remember things! 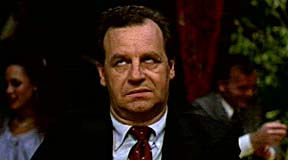 Sure, he’s got a lot going on with family in town and his other daughter’s wedding, but when arranging the wedding for months – and even when the date was announced – a lightbulb should have gone on that Hey! That date is right around Samantha’s birthday. You know, she’s going to be 16 next year. How hard is that?

There lies two other major problems in Jim Baker’s character and they both happen shortly after his little heart-to-heart with his forlorn daughter.

After the wedding, near the climatic scene, Samantha is leaving the church and Jake Ryan is there to pick her up. She points to Jake and mouths to her dad “This is the boy!” and he nods and gives her an OK sign with his hand.

Not only is the sister of the bride not going to the reception, but the dad is all of a sudden OK with her getting into some stranger’s car? Especially a potential boyfriend’s?

Like any father in any movie who is shelling out for a wedding, there is absolutely no chance I would let my daughter skip the reception. That’s a waste of $150 on a meal that she’s not going to eat! Second, my daughter is never getting into a car with a potential date without me at least meeting him. Bonus points if I meet his parents, too.

There are definitely times in any father’s life where he’s going to want a mulligan with his kids – and double that with a daughter – but there is no way that Jim Baker should set any kind of example for fathers.