Let’s just say, for the sake of working with round numbers, there are 30 presents under our tree. Twenty-five of those presents are for my daughter.

We’re hosting Christmas so everyone’s gifts are nestled under our Christmas tree and the majority are for my 10-month old. And, if I had to venture a guess, a majority of the majority are toys for her. We are so fortunate to have family members who adore our kid and who want to spoil her. It helps alleviate some of the pressure from our shoulders. 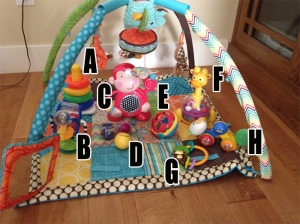 So before we added to our growing collection of toys, this presents a snapshot opportunity to look at what currently litters our living room floor. (Note: this is hardly a complete look, as there are still some things in her room and in her Pack-And-Play.)

A — Brilliant Basics Rock-a-Stack. This is a stack of rings that my kid pulls apart and then doesn’t put them back on the stick. She’s a destroyer, only interested in taking the rings off and then essentially shrugging her shoulders and moving on to something more interesting. The online description says: “Baby can sort and stack the rings, then bat at the base to watch it rock back and forth. Bright colors, shiny reflections and swirling beads stimulate baby’s senses and add to the fun!” What a bunch of crap. Any child who sits and stacks and re-stacks rings is going to be the same kid who is enamored with the white Crayon, which is the absolute worst Crayon.

B — Sassy Fascination Station. This thing is supposed to stick onto the tray of her high chair. It doesn’t. The online description calls it “a miniature Ferries Wheel.” I guess for a crappy product, I shouldn’t expect them to actually spell a Ferris Wheel correctly.

C — Monkey Kaleidoscope. This is one of the few toys that Ella actually plays with for over a minute. You pull the side arm and it plays a 10-second song, “providing hours of push-and-see fun.” That’s what the website says. Hours? Really? You think a one-year old is going to have the patience to sit and listen to the same two 10-second songs for hours? Does this toy come with a helmet for your kid, too? Because if a baby spends hours with this toy, then that kid is going to need a helmet for the rest of its life.

D — Baby Einstein Activity Balls. The worst part of children’s toys is the marketing. We’re only on the fourth toy and already we’ve had “brilliant basics” and “fascination station.” Now we are trying to lure parents into thinking their kid is Baby Einstein. And what happens when your child only bangs the balls against each other for the joy of the noise? Some mother goes into the corner with her martini and cries because her kid doesn’t properly use Baby Einstein toys.

E — Baby Einstein Bendy Ball. Oh, great. More Baby Einstein. The dogs love this toy more than my kid does. You know why? Because when you roll it, the ball inside makes noise and my dogs want to figure out why. My kid looks at it, knows you can’t get the inside ball out, and then slams it on the ground and immediately finds interest in something else. I’m beginning to think Baby Einstein is thusly named so the employees feel better about the simplicity of the toys they’re pumping out.

F — Poppin Park Giraffalaff Tumble Top. Admittedly, this one might be a little advanced for my 10-month old. The idea is you push the giraffe’s (not giraffalaff, which isn’t an animal, dammit) head down and five or six balls spin inside the base. See the kid in this picture? He’s not pushing the head down. You know where it’s going? Straight into his mouth. With so much to explore, a one-year old isn’t going to be interested in sitting around and pushing someone’s head down. Pushing someone’s head down is not a good thing to teach.

G — This monkey ring used to play music. Supposedly it would make sounds when shaken, I guess to encourage the child to learn cause and effect. Shake the toy, hear the noise. Problem was, it was so sensitive that if you walked near it, the vibrations of the floor set it off. We took it with us on a drive to San Francisco. On the six hours there and six hours back it sat in the trunk and played sounds the entire drive, killing the batteries. Yeah, I haven’t exactly been quick about finding replacements.

H — This little toy has the ability to roll across our hardwood floors. My kid is interested in chasing it twice, then something else catches her eye. Then the dogs chase it. I think one of my dogs is going to end up enjoying it more than my kid will.