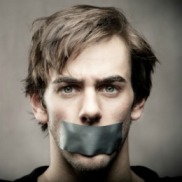 It’s great when she just says two — “da da” — because that makes me excited, but frankly, I don’t think she quite knows what she’s saying, or correlating that I am DaDa and she is referring to me.

The point is, she’s close to saying her first word, or set of words. Therefore, I’ve got to be a lot more careful.

It’s like the Swiss Army Knife of words. And I use it as such.

I also do a pretty good job of censoring myself when necessary. At work, I rarely say fuck unless I’m in my own office and overly upset. And, even then it’s mostly under my breath. At the in-laws, I certainly try not to say it. As a freelance broadcaster, I have never said it (and hope to never say it) on air. And, unless I’m around a bunch of old sailors — which has never once happened — I try not to say it in any mixed company.

(Side note: it’s not like we’re just watching TV or something and I’ll unleash a truckload of fucks or a slew of shits. Could you imagine? Honey! Holy fucking shit! Look! QVC has got a fucking Ginsu knife that will cut through a bunch of shit! Gimme the fucking credit card! I’m buying this fucking shit! That doesn’t happen.)

But, sometimes a swear word will slip, like a fart at a dinner party. Once in awhile, it’s going to come out no matter how hard you try to keep it in.

Lately my wife has been reminding me to clean it up a notch. We don’t want our daughter’s first actual word to be “shitballs” or “douche-nozzle” or “asshat” or something similar.

But it brings up an interesting point: How much do you censor yourself around kids? Especially nine month olds, like we have?

I get that you no longer say aloud that you have to scratch your ass or take a shit or want to make a fucking sandwich. I get that. But how far does it go? A co-worker of mine recalled when her son first crossed the line. Told that someone was going to tinkle, the boy asked “Out of your penis?” I guess it’s better than asking “Out of your cock?”

How do I eventually tell my daughter to defecate in the toilet? Should I just treat it like a nature show and ask her to scat in the proper spot? (Seriously, how I use the term “poop” around her might either be defecate or scat. I’m not kidding.)

Those are things that are down the line and maybe I’ll be smarter as a father by then (probably not). Right now, I’m just worried that she’s going to think that one of our dog’s names is actually “Milo-fuck” when it’s often said “Milo! Fuck!” because the dog just doesn’t fucking listen.

Maybe the best way to clean it up is to just treat everything like I’m working as broadcaster. I’ll even put on the headphones and walk around the house like the handicapped brother in “There’s Something About Mary.” I’m just worried that I’d actually do the play-by-play like it’s a game. And, here’s my wife, walking across the room. She bends down … picks up my daughter … holds her high … AND KISSES HER! WOW! WHAT A MOMENT!

At least it’s better than describing it as “What a fucking moment!” and then having my kid repeat it.