Whether it’s growing up or something about having a little life depending on you and your judgment — good or bad — you tend to stop and think about things a little bit more than before.

My good buddy and I had been planning on hanging out on Friday night for a couple of weeks as he is a father and now I am a father and our lives don’t intersect as much as we’d like them to. We are each big beer nerds so we were planning on going to a new (to us) craft brewery to catch up and hang out.

Problem was, I came home and my daughter was sick.

Immediately I saw it. Her eyes were red and her cheeks were flush. She didn’t look like the happy, bouncing baby I’d come to expect when I walked in the front door.

Should I stay home? I asked my wife

It’s up to you, she replied in that awful, non-committal way that women do.

I looked at my wife. I looked at my daughter. They seemed to be okay together and so I thought everything was in order. I dropped my work stuff off, kissed both of my ladies and headed out the door.

Pulling away from my house I called my buddy, told him I was on my way to meet up with him and then told him I was probably only good for two beers because of my daughter’s condition. Plus, my wife had one of those I haven’t had four consecutive hours of sleep in seven months, if you go drink beer right now I’ll rip your nuts off looks on her face when I left.

Fortunately, as a father, my friend understood. He told me if I wanted to, I should go back home.

I made a U-turn, while still on the phone with him, prepared to go home.

As we continued chatting, I said You know, I think it will be all right. I made another U-turn and started to get on the freeway.

He, knowing more about child-rearing and marriage than I, said to go home, that he understood and even though we had been planning this for awhile and hadn’t seen each other for longer than that, we could re-schedule soon. Kids get sick. Wives need help. Fathers need to be there.

Am I a shitty father already? I asked him. I mean, there are going to be plenty of opportunities for me to be a shitty dad, but I don’t want to start already.

I got off the freeway and made a U-turn to go home. That’s three U-turns in the span of three minutes.

Sure, ultimately, I know if I went to see my friend things would have been fine. My kid didn’t have a raging fever. I could have snuck out for two hours.

But, would I have been choosing a friendship over my family? Is that the underlying message I was delivering?

I walked in the door and my wife asked what I was doing home. 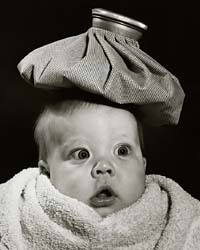 She was being 100% honest, but I know she was a little relieved. A sick kid means extra attention, even when they’re asleep because a stuffy nose means she can’t keep her pacifier in her mouth and if the pacifier’s not in her mouth, then she doesn’t sleep for longer than 30 minutes. If she doesn’t sleep for longer than 30 minutes, it’s a lot of up-and-down to her room to put the pacifier back in her mouth. If it’s a lot of up-and-down you get annoyed and she doesn’t get the amount of sleep she needs to kick whatever has infected her small body.

But, the difference is that when the sicknesses come later, our kid will be sleeping through the night and we won’t be like The Walking Dead, relying on each other to draw strength and take care of a needy kid.

Besides … I’m only six and a half months into being a father. I can’t pigeonhole myself into a shitty dad just yet.